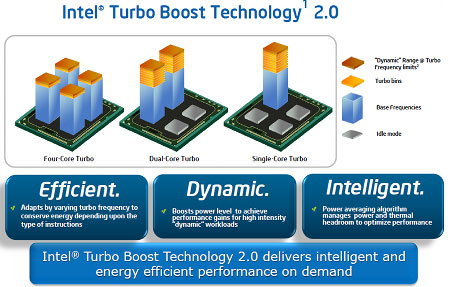 Sandy Bridge also debuts the second generation of Turbo Boost. The whole concept behind Turbo Boost is that if you have a multi-core processor and only one or two of the cores are active, then they can be bumped in frequency while still remaining within the thermal envelope of the die. Currently, Turbo Boost operates operates such that the CPU reaches the TDP as soon as the frequency is bumped. Now, as we all know this is not the case as thermals are transient in behavior. Turbo Boost 2.0 addresses this by allowing the processor to boost the active cores above the TDP for a short period of time before settling down at the TDP. Turbo Boost 2.0 also allows for additional bins over the existing solutions. Finally, Turbo Boost 2.0 for both the CPU and GPU occur in tandem. If one is responsible for the bulk of the load, the other/s can be clocked down to allow for additional boost of the most active unit. This is a thing of beauty. 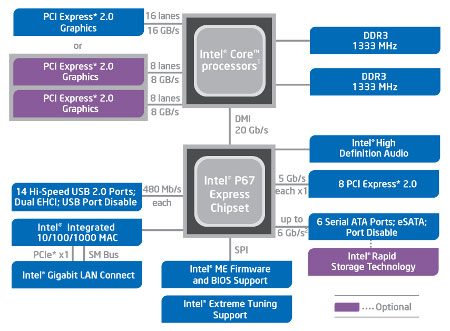 The beginning of the year is also the typical time for new chipsets, and Intel is debuting a grand total of ten new chipset offerings, five of which are aimed at various desktop markets. The two that will garner the most interest from out enthusiast market are the P67 and H67. The 6-Series chipsets follow the same naming scheme as previous Intel chipsets, “P” for mainstream / enthusiast and “H” for the mainstream / entry market. As is annoyingly typical with a new generation of processors, the new Sandy Bridge processors will require a new socket, the socket 1155 vs. 1156 for Westmere / Nehalem variants. This means you’ll also be needing a new board should you wish to move to a Sandy Bridge chip. 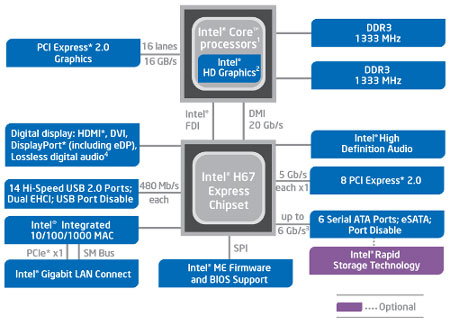 As you can see from the chipset platform diagrams above, the P67 and H67 are very similar. The core differences are that the H67 has the FDI interface between the chipset and processor for utilization of the integrated Intel HD Graphics, as well as the limitation of only one x16 PCI Express 2.0 port on H67. P67 will allow for use of multiple graphics cards, as Intel has done in the past. The other advantage that P67 has over H67 is support for Intel Extreme Tuning software. Both chipsets add two SATA 6GB/s ports, however Intel is still leaving USB 3.0 support to third party chips for now. The main improvements over the previous 5-Series chipsets is a massive improvement in bandwidth for the DMI interface to the chipset. The 6-Series now shows 20GB/s, whereas the 5-Series was 2GB/s. Also, all PCI Express is 2.0 for the 6-Series. The remainder of the architecture remains the same as the previous generation.

Now that we’re familiarized with the new Sandy Bridge microarchitectural changes, as well as had an overview of the chipsets, let’s move on to performance. We’ll be testing the Core i5-2500K on Intel’s DH67BL board, while the Core i7-2600K will be tested on the Intel DP67BG. We’ll be comparing these processors against two of our previous best LGA 1156 processors, the Core i5-750 and Core i7-870 on Intel’s DP55KG. Full reviews of both boards will be arriving in short order, so stay tuned.