It’s that time of the year again, CES is happening and naturally we have new products from Intel to toy with. If you’re new to the performance computing world, you may or may not have heard of the “Tick-Tock” philosophy that Intel employs for deploying new processors. The “Tick” events revolve primarily around a process improvement, i.e. Penryn was 45nm and Westmere 32nm, while a “Tock” event means we have a new microarchitecture gracing our presence. Intel’s Sandy Bridge is a “Tock” event, and is an improvement upon the wildly successful Nehalem microarchitecture. When Nehalem debuted, it was a boon for Intel placing them in the performance lead with little competition from AMD. Intel’s Core Series is still the predominant processor, and the most sought after series for MBReview readers. Today, we’ll be evaluating the Sandy Bridge microarchitecture, as well as comparing the new Core i7-2600K and Core i5-2500K against some Gen 1 Core processors. This will only be the first of several reviews over the next few days and weeks covering the new processors, and the new chipsets that come along for the ride. 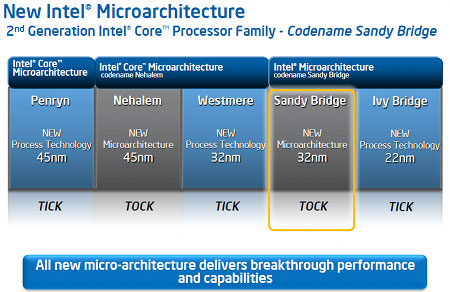 One of the key weaknesses of the existing Westmere processors is the fact that those with integrated graphics require a specialized packaging technique. These processors use two individual dies, each based off of a different manufacturing process. If you remember back to the initial days of dual core processors, this is also how Intel chose to develop the first products. There was much argument over whether or not these were truly “dual core” processors as they were not one monolithic die. All arguments aside, this dual-die issue is addressed in Sandy Bridge processors. As the 32nm process has matured, Intel is now able to package both the integrated graphics core and processor core into a single monolithic die. Another key weakness, if you can call it that, is that the Nehalem / Westmere products simply can’t be bumped up in frequency much more, if at all. Given all the thermal and manufacturing constraints, the only other way to provide a boost in performance is to either move to a smaller manufacturing process and bump frequency, or improve the microarchitecture of the processor. That improved microarchitecture, and bumped frequency level, is Sandy Bridge. 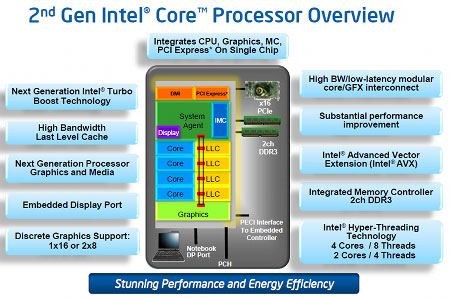 Perhaps the most annoying buzzword of the past few years has to be “integration” and it’s associated variants, however, this concept has also brought some of the most innovative and popular products to date to the world. We’ve seen a steady progression over time of key functionality that formerly resided in the Northbridge being moved directly onto the processor die. This offers a slew of advantages with both cost and performance, and Sandy Bridge brings this effort to a head. Sandy Bridge processors will finally fully integrate the memory controller, PCI Express controller and now the graphics core. What’s next in the integration train? Only time will tell.