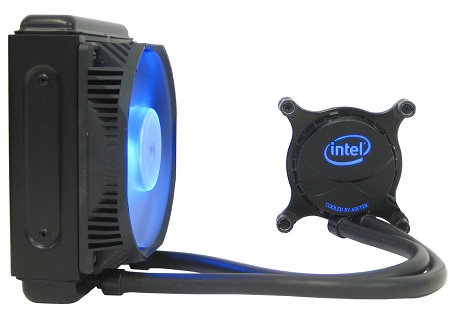 A fairly big change that Intel has made with these 130W LGA-2011 beasts is that they are no longer boxing stock coolers. Now, I don’t know of anyone who would actually bother using one of those stock coolers if they are into gaming or performance in any way, but it is one less item of value included with the processor. Instead, Intel is selling the stock cooler separately if it is so desired. They also have joined the world of closed loop water cooling solutions with their own, manufactured by Asetek. This cooler is priced slightly high, but does allow for quiet computing even under a heavier load without the need for a massive radiator.

Speaking of the radiator, this unit comes in at 150mm x 118mm x 37mm. That’s small enough that it can fit in the back of a tower that supports 120mm fans, but it may be tight. I had to rotate the radiator and use the included extensions to mount it in my chassis, but it still left enough workable room inside. Installation of the block was somewhat annoying as you need to hold the block in place, along with the hold-down bracket. It shifts around quite easily and took a try or two to get it installed correctly. Nothing unexpected, but I was hoping for something a little more K.I.S.S. than this.

The included fan, as well as the logo and text on the block light up in blue when the system is on. It adds a little something for the modders of the world, but I’d rather have clear, glowing tubes than a little blue ambient lighting. In our testing, the fan was quiet enough that it was not noticeable until running at ~60%. With the DX79SI, this speed will rarely be reached using the default BIOS settings, a.k.a. slower response to thermal rise, but it did keep the processor at reasonable (<70C) temperatures. Note that the test system has ample fresh air intake and exhaust capabilities so your mileage will vary on temperatures.