As we complete our revolution around the DP55KG, we find an amusing feature of the Extreme Series DP55KG, the backlit skull. This skull is backlit by a series of bright blue LEDs and provides a nice effect for those who are in the windowed case world. Functionally this offers up little, but adds some flare to the DP55KG. Along the edge of the board we find a total of eight SATA slots, three sets of black ports supported directly by the P55 chipset, and two supported by the Marvell RAID controller. There is also a rogue debug connector located here you won’t be finding on your retial solution, in case you’re wondering what that is. Sorry, no tapping into your boards inner signaling so easy. 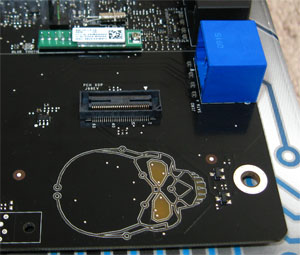 The P55 chipset itself is covered by a simple silver heatsink. With the bulk of the heat generating logic now placed on the processor, larger and more exotic cooling solutions are no longer needed to keep the chipset running cool. The onboard Bluetooth module is found beneath the P55 chipset, and appears in the above photo as a small green rectangle. Pop in the included antenna and you’ll be ready to roll with Bluetooth support.

Around the DDR3 DIMMs we have a four-pin fan connector for intake fans, followed closely by the blue header for IEEE-1394a and two USB headers for front panel or expansion support. Next up we find the typical Winbond Super I/O chip, consumer IR headers, the front panel LED /Power / Reset header and finally the 24-pin ATX power connector. All of these headers are located in excellent positions to allow for short and neat cable runs to front panel connectors. The ATX power connector in the upper right also allows for easy cable routing and improved airflow to the CPU. 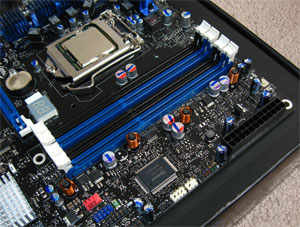 The DDR3 DIMMs themselves are colored in blue and black to represent the two channels. Remember, while X58 supports triple channel DDR3, the P55 and respective LGA 1156 processors only support dual channel DDR3. Supporting up to 4GB DIMMs in each slot, I think anyone would be satisfied with the offering. The only qualm that I have with these is that the bottom retention locks can’t be opened fully without removing the graphics card. This is a common issue among boards and is more of an annoyance than any real issue. They are also fairly close to the processor socket, so extreme cooling solutions may be limited to one direction if you plan on using all four DDR3 slots. We were limited to one orientation with the provided Thermalright LGA 1156 solution due to an overhang of the fan on the nearest black DDR3 DIMM slot.

Overall, this is a clean board design. I don’t see any major issues for airflow, cable routing, etc. but beware of the use of larger cooling solutions and the DIMM overlap. The amount of cooling that the components on this board require is quite refreshing. Rather than having a massive heatsink covering the board, or having an annoyingly loud fan on what used to serve as the ICH, we have a cooler board as well as a quieter board. No complaints here.

Performance tuning is perhaps the most important capability of a motherboard product for the high end user. After all, we’re shelling out big bucks for boards we expect to take our processor, memory, graphics, you name it to the peak of performance. Intel has recently posted their own performance tuning guide for the DP55KG (and DP55SB) on their website. This guide provides a good overview of the BIOS areas that relate directly to the performance of the system as a whole. If you’d like to read the full tuning guide, head over to Intel’s DP55KG technical documentation site or alternatively, our site to download it.

One of the most important aspects to overclocking is the ability to recover from your, shall we say, overzealous nature. With the DP55KG, Intel offers up three different methods for recovery from an unstable system. The first of these methods is a watchdog. This is automatically enabled in the BIOS and will default the system to safe settings should it detect instability of if the board hangs during boot. A simple, yet effective first line of defense. A second option is using Intel “Back to BIOS” button. This button is located on the rear I/O panel. If you look in the photo above, you’ll notice what looks to be a white button. If this button is depressed, the button will light up in red and the system will boot the board into “Back to BIOS” mode. This allows the system to boot with default settings, but also shows you the settings that you had previously set. Again, an excellent feature that avoids diving into the case. If all else fails, it’s time to tear off the side of the case and swap the BIOS jumper to Configuration mode, again booting the system with safe settings. It’s safe to say, Intel has developed a well thought out process to recover from system instability.