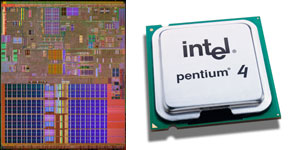 At the time of AMD’s Athlon 64 release, Intel was seen downplaying the importance and advantages of a 64-bit setup to the average consumer, basically saying that they would supply a 64-bit capable processor when the time was right. Well, with the impending release of Microsoft’s WindowsXP x64 Professional Edition OS, it seems that now is the right time.

I doubt that anyone out there expected to see Intel launch their 64-bit processors at any other time, waiting in the background until Microsoft was ready to launch their 64-bit WindowsXP OS. Some might look at this in a conspiratorial light; in fact I wouldn’t be surprised if several of you reading this article fell into that category. We’ll leave these thoughts to others, as today we look to examine the Intel 6xx Pentium 4 “Prescott 2” line of processors, as well as the new 3.73GHz Extreme Edition, also based off of the “Prescott 2” core.

Today, we’ll be taking a look at Intel’s EM64T technology, as well as performance under the latest beta release of Microsoft’s WindowsXP x64 Pro. Intel’s EM64T processors have a few changes made to the architecture, namely with registers, the stack, and instructions. What do we think about these new processors? How do they compare versus older “Northwood” core Extreme Edition CPU’s? Read on to find out.

Scroll back to top